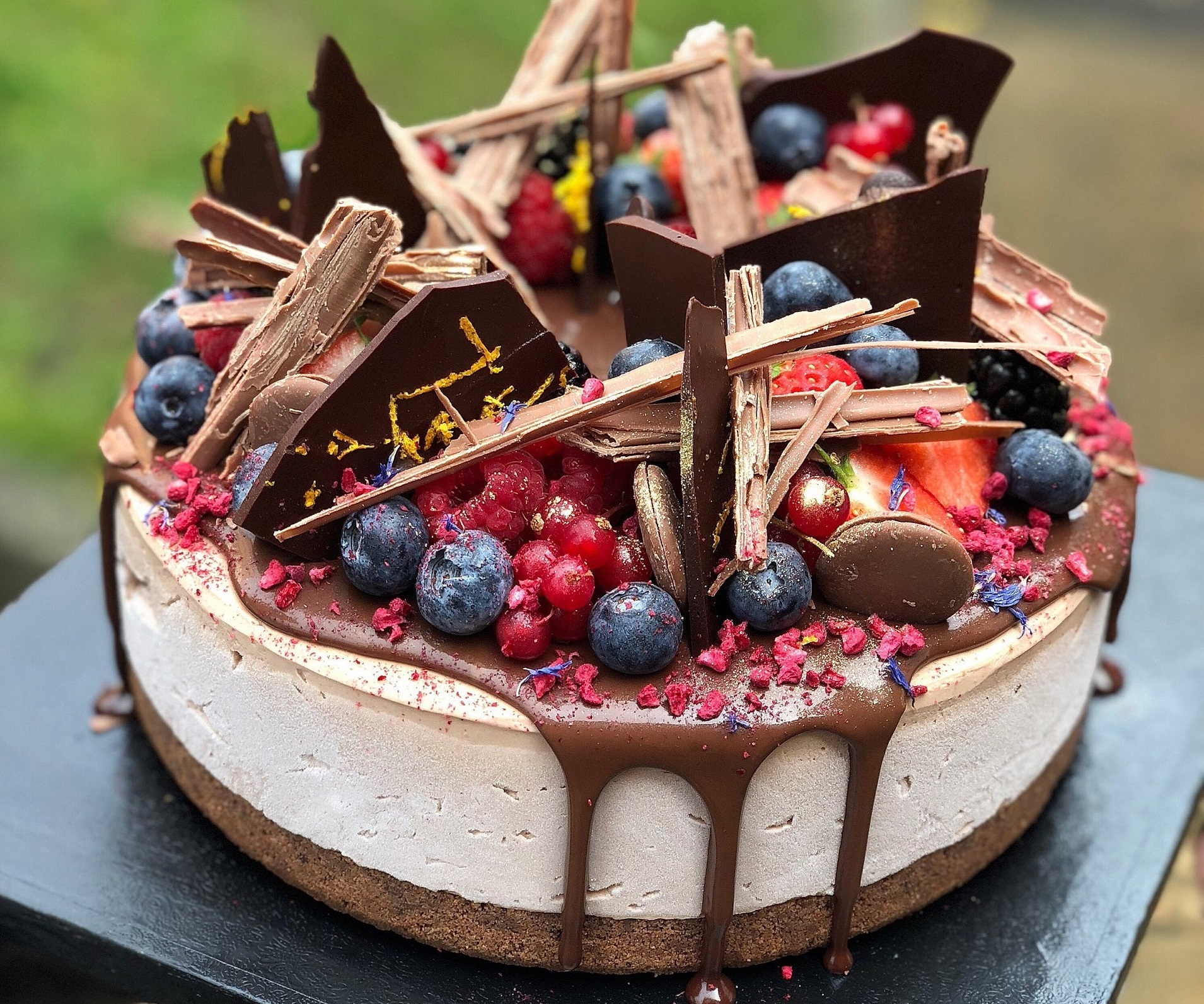 Pleesecakes managing director and owner, Joe Moruzzi (age thirty), is a man in a hurry. In less than a year, his accidental business has exploded onto the fancy dessert scene. “I really had no idea how many people love cheesecake” he muses.

“Pleesecakes came to us through another long standing and valued client who happened to live next door to Joe’s parents,” explained Lubbock Fine managing partner, Mark Turner. “It’s a hugely exciting company and just the sort of start-up we love to help. Joe’s never run a product supply business before” he continued, “and we’re helping him in all sorts of areas, including setting up his accounting system to integrate with the website, and getting automated ordering set up. There’s a lot to do, Joe’s bursting with ideas so the business is very dynamic. Oh, and the cakes are delicious!”

“If anyone would like a bit of advice from me” adds Joe, “it’s don’t do it like I did it! Get a good infrastructure in place to make your life a whole lot easier. Get the right accountancy and legal teams on board to support your business – that’s absolutely critical. We have all that now but it took a while. The guys at Lubbock Fine have provided invaluable help and support and are always on-hand to advise and stop us making any irreversible mistakes!”

As a former wannabe stuntman, then painter and decorator, Joe used to make elaborately decorated cheesecakes for family and friends. The impetus came from having watched his father try to make a cake (unsuccessfully) and that inspired Joe to try cake making himself. He had no training and no intention of turning that talent into his life’s work. Thinking he may make a bit of extra cash on the side, in January 2017, he set up an Instagram page with a view to selling a few cakes to friends and personal contacts. Due to an unsolicited, “shout out” from his friend, Joe Wicks (aka The Body Coach), a man with over two million Instagram followers, Pleesecakes became an overnight sensation attracting over ten thousand followers by the next day. Those ten thousand followers soon became fifteen thousand and fifty email enquiries followed in the first 24-hours.

After this initial exposure on social media, Joe’s intention was to target his local area in Tadworth, still planning to make the cakes “on the side”. But very soon, some of Wicks’ celebrity friends and contacts began to commission cakes and feature those on their own Instagram and Twitter feeds, which soon led to a commission from McVities to make a cake for the Queen on that company’s behalf. Pleesecakes’ exposure was now massive, despite never having spent a penny on marketing or advertising.

Joe’s business partner, Brendon Parry soon also gave up painting and decorating and they both jumped, feet first, into cheesecakes. “You could say we went from decorating houses to decorating cakes”.

As a massive stroke of luck just two weeks into the business starting, Joe was approached by Samantha (Sam) Hunt. She’d seen the social media going off the scale and offered to take control of the admin side of the business. Having visited the kitchen and talked to Joe, Sam agreed to put two hours per day into the job. That soon increased to eight-hour days, five days per week and has steadily grown to around sixteen hours (Joe’s estimate), seven days a week! She now liaises with customers, deals with orders and is working closely with Lubbock Fine on automating the website and systems. Joe’s quick to recognise that Sam is integral to Pleesecakes. “Sam’s invaluable, she’s massively important to us and one of the main pillars supporting the growth and development of the company. I’m not sure we could have got this far without her.”

Three months into operations, Pleesecakes was approached by a literary agent who asked if Joe would like to write a book. After a short bidding war between publishers, the deal was signed and sealed, catapulting the company into yet another race, this time to produce material and photography within a couple of months, for a launch on October 18th 2018. During October and November, Joe took to the small screen, appearing on ITV’s ‘This Morning’, to support the launch and promote the book. “Pleesecakes – 60 awesome, no-bake cheesecake recipes” covers all manner of cheesecake recipes including the savoury mac and cheese cake, the cheeseboard cake and the chicken wings cake. It’s available at booksellers (including Amazon), and has been well received with great sale figures.

“At kick-off, we really didn’t have a clue what we were doing,” explains Joe. “I had no recipes and I didn’t weigh anything. That meant that we never made precisely the same product twice! We careered along, it was a very steep learning curve and we messed up a lot. Having not researched the market or investigated Health and Safety or anything like that, all that initial chaos was really the best thing that could have happened. Had we known more in advance, we might not have taken so many risks. We learned so much along the way and up until now, we don’t have any real competition although we’re starting to see copycat social media pages but they’re on a much smaller scale. It’s flattering really.”

Soon the company was catering for weddings, birthdays and corporate events. Once news of the brand reached Selfridges Food Hall, Pleesecakes was invited to set up a “Build your own cheesecake” bar as a “pop-up”. It ran for five weeks and proved so successful that Selfridges now permanently stock Pleesecakes’ “Mini’s” in their bakery. Initially expected to sell 100 minis per week, sales are currently reaching 400 to 600 per week and this was expected to double or triple over the Christmas period. And speaking of Christmas, Pleesecakes ran a Yuletide collaboration with chocolatiers Lindt, for which they produced cheesecakes with the famous Lindt reindeer on top.

On 9th September 2018, Joe and Pleesecakes appeared on the BBC’s Dragons Den. Although he didn’t walk away with the Dragons’ investment, the TV appearance proved hugely affirming, with lots of encouraging comments, positive feedback all around and approaches from investors and customers flying in from all directions.

The growth and expansion of Pleesecakes has been so meteoric that until quite recently, all cakes and deliveries were being made from very modest kitchen premises. He describes Christmas 2017 as being “carnage”, with major challenges in keeping on top of demand, “I was sending my Mum off delivering all around the country, it was mad. We’ve now hired two great chefs and will shortly be relocating to a 4,000 square foot industrial kitchen. It’s the real deal, with big walk-in freezers, and allows us to systemise and operate much more efficiently. But I’m keeping control of designing all the toppings! ”

The business is galloping from strength to strength and still hasn’t spent a penny on marketing or advertising. “Joe clearly loves what he does,” says Lubbock Fine manager, Rebecca Bryant. “It’s his passion. He loves food and translates that into making these lavish, luscious cheesecakes. His concepts for add-ons seem never-ending and a ‘Build Your Own at Home’ YouTube channel complete with decorating tutorials is in the planning. He’s also on the point of launching an amazing chocolate bar featuring his unique, creative, decorative touch. He’s the sort of client we love as no day is ever the same and his free flowing ideas are endlessly fascinating.”

Joe claims to have a low boredom threshold, which is what keeps the business developing. Having recently launched in Dubai (under license), he now wants to expand, organically and not too fast, into the USA and maybe then into Asia. Pleesecakes is also in discussion with several cinema groups to put cheesecake bars into cinemas. Joe would also like to explore collaborations with celebrity chefs, a number of whom have sent admiring messages in response to Pleesecakes’ Instagram posts.

For someone who began his career as a lifeguard, trained to be a stunt man (appearing in Harry Potter, X-men and War Horse), fell into painting and decorating and then discovered a massive hidden talent for making fantastic cakes, Joe Moruzzi is one to watch.

For more information about ordering cakes (including customised “Big Boys” serving up to fifteen people) and to see some great product photos please go to www.pleesecakes.com